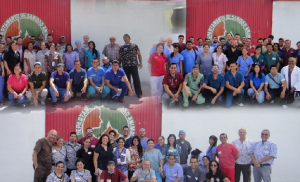 The Mckee Foundation training in Guadalajara, Mexico is dedicated to all the little donors from everywhere in the world who desire to do a difference for humane animal welfare on this planet.

4 veterinarians and 1 administrator from McKee Foundation traveled to Mexico from September 20th to the 26th of 2015:

The Guadalajara Veterinarians from the Secretary of Health estimate that there is 1 dog for every 10 residents. However, based on his experience throughout Latin America, McKee’s President, Dr. Vicente, DVM, MPH, head veterinarian for the Costa Rican Ministry of Health, estimates that this number is significantly higher, as well as a published study by Ortega-Pacheco (2007) indicate that the ratio may be closer to 1 dog to every 4 residents in urban areas, and 1 dog for every 2 to 5 residents in rural areas.

The Municipal Government of Guadalajara current method to decrease the street dog population is to trap, house for five days and euthanize, if the dog is not claimed. The kill rate is 95%. The Jalisco state and Guadalajara`s Municipal Government want to lower this percentage. Besides humane concerns, the fiscal impact of sheltering and euthanasia –which does not affect reproduction rates and therefore is futile as a method of population control- is a major factor in taking a look at another strategy.

The Mckee Foundation was invited by the Government of Jalisco to visit Guadalajara city and teach the McKee’s surgery technique, our first visit was in October in 2013, where we trained 60 veterinarians and spay/neutered (s/n) 203 animals. Due to the success of the first visit the Mckee team was invited a second time in September of 2015. The Mckee Strategy not only provides a tool to humanely address overpopulation of companion animals, cost effectively, but also humanely addresses serious public health issues such as rabies.

The campaign was organized by the Secretary of Health of Jalisco on behalf of the International Day Against Rabies. The training consisted of two days of lectures about the steps to create a s/n community campaign, urban myths about neutering, veterinary emergency pre- and post- operatory, advanced techniques of spay, importance of neuter campaigns to decrease the population of dogs and cats. Followed by three days of training, in the Anti-Rabies Center of Zapopan.

Each day of the training a veterinarian who excelled in the technique was chosen and given an award, the three top doctors were: MVZ Adán Gildo Cárdenas, MVZ Verónica Sotelo Villegas and MVZ Francisco Javier Mora Maldonado. 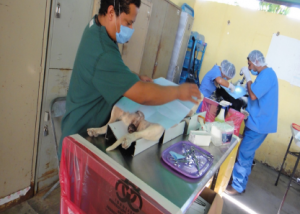 * Micro-laparotomy for ovary-hysterectomy in female dogs and cats, a technique that is less invasive, takes less recovery time, has a lower risk of complications, cuts surgery time, uses less anesthesia, its cost effective and can be performed in rural settings.

During the three days of practice spay/neuter the veterinarians faced some cases of emergencies due to the poor health of the animals or underlying medical condition and lack of experience in the new technique of the training vets. These emergencies were handled by the McKee training team, demonstrating how resolve such an emergency”.

*Until September 2015.
By teaching not only private practice veterinarians, but also Mexican government veterinarians that there is a humane alternative to lower animal population, cost-effectively, and addresses serious public health issues such as rabies and other zoonotic diseases, is a great step forward in animal welfare in Mexico.
McKee could not have taken this step if not for the faith in and support of the small donors and the doctors of the McKee Project Foundation. Thank you from McKee for making a difference in the dark corners of animal welfare.
A special thanks to the Markoff Foundation for starting the McKee Markoff Surgery Instrument Program for veterinarians in Latin America to ensure enough sterilized instruments for high volume spay neuter surgery. 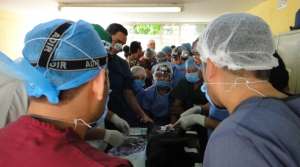